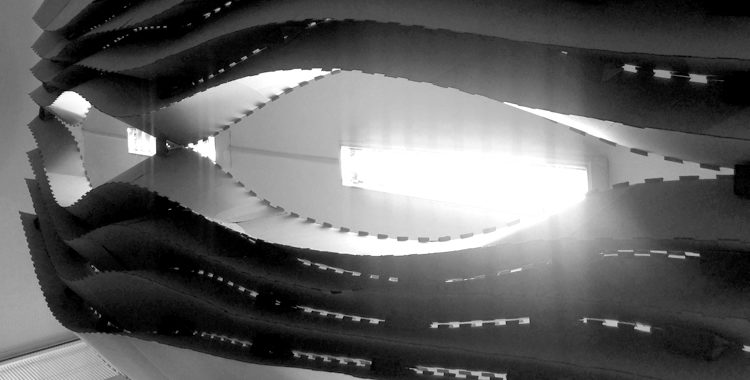 What’s a beginner workshop for?

. new paradigms of designing and making

RELIEF aimed to teach the basics of computational design and a direct link to fabrication with a focus on shape as structural device. The fast pace intensive workshop exposed the participants to the algorithmic and parametric logics to design, engineer and fabricate through a laser cutter a suspended structure for a filter space within the Faculty of Engineering building.

Any material organization exhibits different performances according to its morphological organization: from the arrangement of parts down to the molecular level aggregation. Calcium carbonate, for example, is easily found as a mineral but it also what mother-of-pearl is made of. The difference is in the arrangement on the microscopic level: the nacre (the smooth part of the oyster’s shell – also known as mother-of-pearl) has a layered structure with conical bumpers in between; this different arrangement makes the exact same material 3000 times stronger than its rock mineral state.

Similarly, in biology as well as in architecture, double layer shells, triangulations, folds, creases, bending improve the resistance of material systems, allowing the construction of large-span lightweight and resistant structures with relatively weak materials. All of the above are modifications on the structure and/or organization of the material system, added information that allow new paths for stiffness, stress support and dissipation.

After a brief introduction to stiffening strategies and a basic understanding of algorithmic logic through Grasshopper® for Rhino, the participants were asked to test initial ideas with paper prototypes and proofs of concept. Due to the constraints of time, fabrication size and material availability, the final decision fell on laser-cutting 1.5 mm thick corrugated cardboard. Within a few rounds of trial, error and feedback, a general strategy was elected: use triangulation and curvature to build tubular components arranged to second the main flow of people inside the filter space and respect the current position of the existing neon lights.

Speeding through a quick design phase, 4 curves and a surface were designed as a guide geometry to inform the beams development and depth respectively. To add further dynamics to the perception from underneath, the bottom edge of the triangular section is skewed towards the central axis the more the beam is far from it.

The beams were designed to be ruled surfaces generated by a linear section between couple of curves: although this does not fall precisely within a perfectly developable surface, the aberration (measured as a difference between the original and unrolled surface areas) was contained between the 0.001 and 0.1 percent (which was small enough to proceed). In order to join the beams surfaces together, a jigsaw pattern was generated. The jigsaw pattern works because the surfaces share the same edge curves, therefore the necessary condition is to divide it in the same even number of elements in bot surfaces’ corresponding edge. If an odd number of divisions is used, the jigs are overlapping: although this compromises the jigsaw locking, it allows for joining together the pieces through glueing or stapling; running against time made me forget about the even divisions condition so when all the pieces were fabricated, some edges were even and some (the majority) were odd. Due to the lack of time to do test prototypes, we realized too late that the jigsaw shape acted weakly on a full-length beam but there was no time to correct the design. Also, the majority of elements presented the odd subdivision, with overlapping parts. Stapling those parts proved to deliver enough stiffness, so we decided to change the interlocking edges to overlapping, re-cutting the needed surfaces (around 5% of the total pieces).

In order to avoid the beams to bend along the connecting edges and reach the necessary stiffness, interposed wedge-shaped elements were designed and deployed as a further detailing ornamental pattern across the entire structure. Connectors and beams are joined via zip-ties running across aligned holes in the beams.

A further challenge was provided by the constraints of the laser cutter, which bed size limits allowed only sheets up to 100 x 70 cm; therefore, a system for subdividing the 5m long beam surfaces had to be devised, alternating cuts on the three sides to avoid a weak cross section.