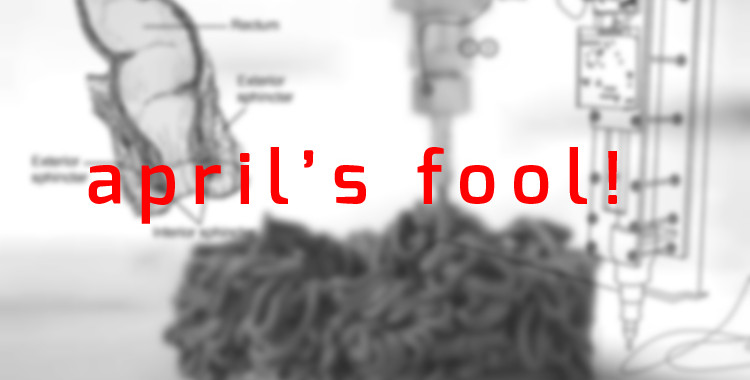 Following our recent interest in the fusion between the computational and the biological, which had its first milestone in the Bio-Logic workshop recently held in Amsterdam, we decided to take things further and worked 24-7 with a specialized team of biologists, geneticists and programmers aiming to a unique goal: programming living organisms.

As a starting point for this new endeavor we asked ourselves if 3D printing technology could be drastically improved by optimizing the resources involved: materials and machines. Nowadays machines are unsustainable, made from artificial and polluting materials, and definitely not in touch with nature, so we decided to focus our efforts onto something that actually is: the human body. The human body is able to produce an average of 300 Kg per year (which corresponds to an approx volume of 40 m3) of recyclable, sustainable material perfectly suitable for 3D printing.
We developed and patented a sintherization technique called Super High Impact Technology that hacks the colonies of escherichia coli in the human intestine in order to produce a material with the required performances. The hacking agent is a pill (Composite Reusable Adaptable Pill) that can be ingested and contains all the necessary information in order to build the 3D-model.
But the material is not enough: one of the technological challenges of 3D printing technology is the development of a high performance nozzle. After an experimental phase that lasted several months we finally had a breakthrough this year and patented our special technology called Actuator Nozzle for Universal Shapes. That’s right, we developed not one, but two patents for this project. The A.N.U.S. is the perfect nozzle, by controlling sphincter contractions and expansions it is possible to print in variable thickness.

An ordinary meal (starter + main course + dessert) provides enough material for a small 3D printed object (approximate volume: 10 x 10 x 10 cm3). The amount of fibers (in the form of cereals and vegetables) influences significantly the mechanic characteristics of the material.

According to our simulations, an architectural firm with 30-50 employees is able to produce a 1:50 architectural model of a football stadium in 5 hours with combined effort (the most advanced Objet printer would take double the time for the same model).

Our next goals include the exploration of variable density and multi material printing, multicolor printing (our current color chart goes from Mustard Yellow to Dark Chocolate with a few shades of green in between).