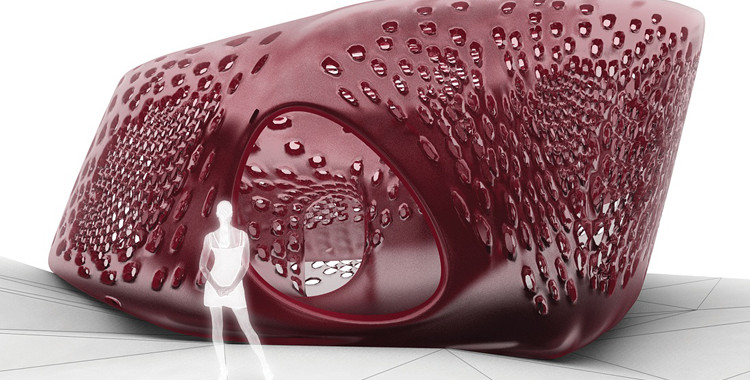 Flowers are considered mainly as symbols of grace, beauty, fragility and transiency of things. They were the very first form of human body decoration (such as jewels), used to enhance seductive qualities. Besides their semiologic value, flowers are exceptional organs in which performance and economy of form are highly evolved: space, structure and material are tightly connected to environmental behavior.

Flowering plants, thanks to sexuated reproduction, are one of the most adaptive specie; flowers are their sexual organs. Entomophilous flowers rely on insects as hosts to perform sexuated reproduction (through pollination), so they base their reproductive potential on attraction. Differently from anemophilous flowers (which rely on wind and are mostly white and inodor), entomophilous show a wider range of forms, spatial organizations, color patterns and odors. Beauty then performs an essential function, triggering different strategies which are actuated through morphological conditions.

Starting from the analysis of the properties of the Cyclamen Graecum, we investigated the particular conditions of its petals: they are the main tool through which the flower signals its presence to insects. In the Cyclamen the weight of the head bends the stem downward, thus easing insect approaching from below, while petals elongate and bend upward signaling the flower position, creating a very interesting topological condition around the corolla. Their plication creates a continuous passage from outer to inner space, just like some typical topological surfaces, such as the Klein Bottle, which are continuously spatially connected. The differentiation of inner spaces out of continuous surfaces is a typical topological condition in living organisms and it is a phenomenon which starts in the embryo, when the initial cell aggregation (blastula) starts bending inward and creates the first spatial differentiation between outside and inside; it is called gastrulation. Another concept related to the Klein Bottle, this time  from the side of mathematics, is involution, a mathematical function which applied twice brings back to the starting point.

The petals condition (along with the concepts of involution, gastrulation and with the translucency and color properties of the petals) was then explored under TopMod®, a topological mesh modeler, testing different strategies within an open process that led to the final shape through generative process driven by the program and a selection criteria based on consistency with the conceptual basis, avoiding a mere biomorphic translation.
The pavilion is a continuous surface that differentiates environment into 3 different spaces: an exterior outside the pavilion in which the envelope surface defines the overall shape and two different interior spaces, a ring that embraces a court and creates different gradients of use within it. Different gradients of transparency/translucency, established according to a map of activities based on performative qualities of morphology, are implemented through the use of holes in the surface and not only relying on material properties (pigmentation).

[attr]-action is a project developed by Alessio Erioli together with Antonio Vacca from alfa301 during “flower obsession” studio, held by SPAN
(Matias Del Campo + Sandra Manninger) in the 2008 Biodigital Architecture Master at ESARQ, Universitat Internacional de Catalunya,
Thanks to Matias & Sandra for their inspirational studio & teaching.