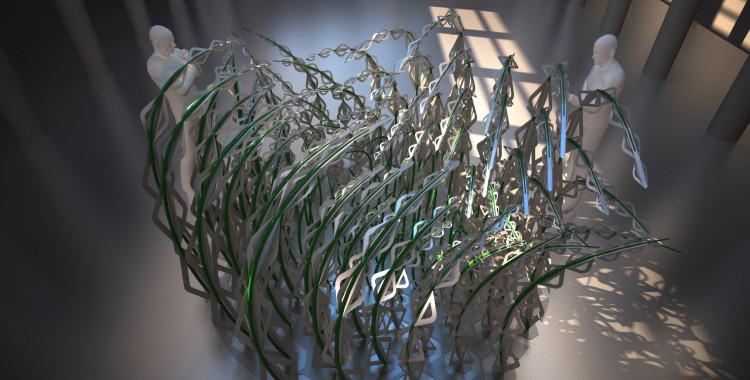 It’s hard to believe that anything useful in architecture can be conceived without connection: Architecure IS connection in all its forms. The main concept of this project comes from the idea that any kind of architecture requires its own specially designed joint and the creation of the connection is highly dependent on the type of material used – XX aluminium sheets, in this case.

The joint is formed by two parts that overlap, and potentially no screw should not be used to merge the two parties: two little wings can be manually bended into a rotating cross, thus creating a fixed component arrangement. The cross can be rotated and scaled following the size of the component and the general orientation of the overall system.

The component is derived from a lasercutted rhombus relieved of its internal parts and connected to another rhombus mirrored on its back. This union follows the whole scheme through iterative and repetitive means, by scaling the size and rotating the orientation of the “leaf” main axis.

The leaf pattern follows in plan the scheme of the phyllotaxis, and each wire is linked to the ground by a stainless steele plate laying on the ground and connected to the other adjacent plates.

This particular kind of process leads necessarily to the creation of repetitive modules into a reiterative scheme that changes from the small scale of the joint to the bigger scale of the overall scheme, leading to a deeper and substantial modification of the aesthetic and structural characteristics of the project.