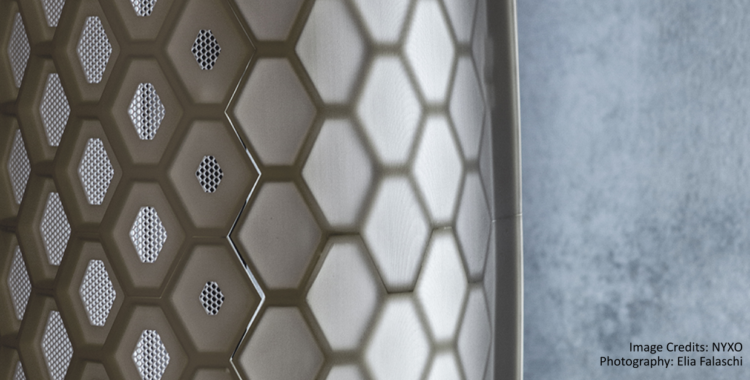 The main goal was to study a special effect able to attract and involve the user in the dynamics of the air flow. The front surface is affected by the breath of the air conditioning tower and swells following the air flow. Parametric design is used as a medium in order to create and control the dynamic feedback and the mutual interaction of the diverse components.

The micro-scale composition of the frontal membrane, only possible to be built with 3d printing technology, allows its expansion. This elastic skin indeed, is characterized by a series of small cells held together through an array of springs harmonized in their size and shape to the specific area where they affect.
The formal language of the front membrane drives the design of the other parts of the unit, like the hexagonal pattern that defines the nervature of the shell. This pattern proliferates on the surface adapting itself to specific situation, in particular it configures a transition from the inner to the outer side of the shell: it becomes clearly visible on its back, appearing smoothly to describe the air inlet. The articulation of the pattern, where the outer surface is smooth, is revealed by a LED illumination placed inside the body that also visualize the rhythm of its activity.

You can check the photo gallery and video here >> http://www.nyxostudio.com/2016/07/12/aemotion-haier-group/