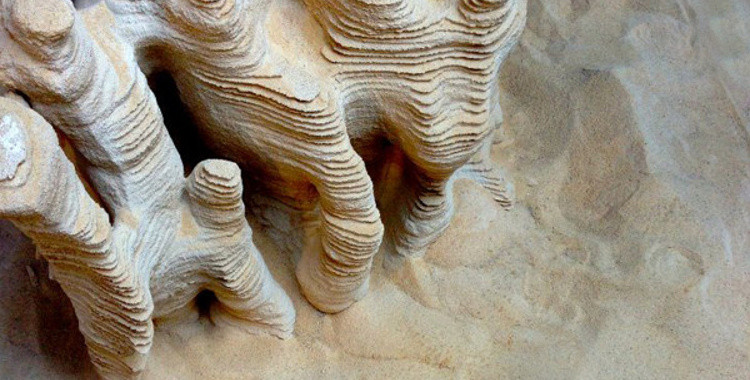 The Co-de-iT unit (Tommaso Casucci and Alessandro Zomparelli) explored the use of advanced computational strategies and simulation to define proactive architectural formations inside the extreme conditions of the desert ecology. This design intent was pursued through the use of non linear strategies operating within systems of multiple self-organized agents and lattice simulations. Starting from the observation of natural fenomena inside the Jordanian desert, the students was guided in the use of digital simulation, reproducing some of the rules behind many of the observed natural formations, towards architectural design intents. From a purely technical standpoint students approached a set of advanced computational tools such as Rhinoceros Grasshopper (stresses analisys with Millipede) and Processing (Multiagent based simulations, CA/Reaction Diffusion systems) in an integrated pipeline for design.

Co-de-it unit was sponsored by D-Shape that offered its support as consultant and their registered materials for the fabrication of large scale 3D models produced transforming desert sand in a solid and efficient building material. The workshop included a 2 days field trip on the desert of Wadi Rum and the ancient city of Petra. During the filed trip students were encuraged to document natural and manmade formations present in the desert environment. Back to Amman students assisted to a series of tutorials introducing them to the use of Processing and in particular multi-agent based simulations and CA/Reaction Diffusion systems and to the use of Millipede for Grasshopper for stress analysis. The students was then organized into two sub-groups to work to two final project proposals. The final presentations consisted in a 15 minutes presentation of images and videos explaining the projects and a series of physical models.

The design process consisted in the combination of topological optimization studies based on stresses analysis, defining the overall distribution of the project, and a 2.5D Reaction Diffusion (Grey Scott) system that were used to define the detailed spacial qualities of the overall formations. In particular more or less dense areas are defined accodingly to stresses intensity throughout the analysed volume. The project is a proposal for an observation platform on the top of one of the many rock formations present inside the Jordanian desert. Starting from the observation of rock formations, the project aim to engage erosion processes as an active phenomenon to articulate project qualities both performatively (water collection) and aesthetically (definition of controlled surface erosion patterns). The platform main articulation was defined exlopring many different spatial articulations and continuously verifing thier capacity of create selfsupporting structures through the use of the Millipede plug-in for Grasshopper. Multi-agent based strategies was then utilized to define surface patterns capable to intentionally drive the structure erosion during time and at the same time to act as water/moisture collection strategy. . Exposition in Amman the visiting school projects has been presented in the occasion of the exposition TRENDSETTING IV: ARCHITECT AS DESIGNER , at Nabad Gallery in Amman from 9th December to 29th January 2014